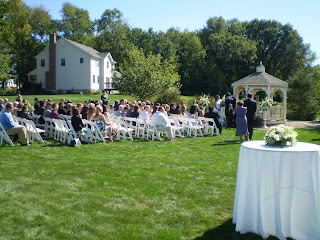 Well it appears as if Courtney & William might have just masterminded the most beautiful day of the year for an outdoor Ceremony and a outdoor tented reception. Without a cloud in the sky, the picture perfect day started with a non traditional Ceremony outside at the gazebo at Courtney's parents home.
At Courtney's urging the Justice of the Peace Steven Mitchell moved the entire Ceremony along at a brisk pace and the vows done in minutes. 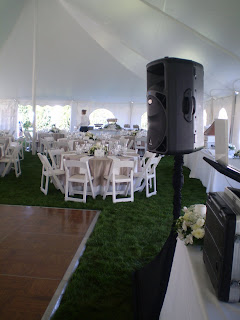 After the Ceremony, Cocktails took place inside and outside the massive 100x40 white tent with passed Hors'Dourves. We played an upbeat mix of selections ranging from Bob Marley to Jason Mraz to Jack Johnson and Frank Sinatra. Many of the attending guests commented on how well the music selections complemented the weather.
After Introductions, and a heartfelt welcome speech from the Father of the Bride Angelo, dinner was served by Lizanne Searing and Taking Care Of Tummies with a stunning array of traditional catered and BBQ food.
With, again, a more upbeat feel for dinner music, we had guests dancing throughout. After dinner and Cake Cutting we started off the dancing with the Father Daughter Dance. 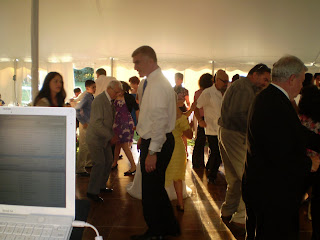 Appropriately, Courtney and her dad Angelo selected Paul Simon's "Father and Daughter" which we carefully and tastefully custom edited together with words from Angelo's welcome speech.
There wasn't a dry eye under the tent during the Father Daughter Dance.
From that point onwards we had a packed dance floor throughout the afternoon and into the evening. It appeared that Courtney truly did not want her reception to end.
William & Courtney's music selections included:
Copyright © 2009 Atmosphere Productions™ LLC , All Rights Reserved. Become a fan on Facebook
Weddings