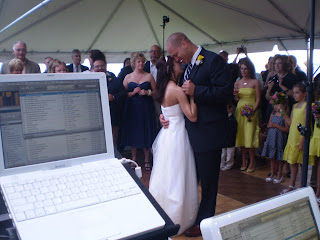 Meghan & Alex's wedding reception at the Branford House in Groton, CT on July 3rd was a beautiful and fun evening. The fireworks from across the river added a memorable and festive touch. It was a beautiful evening for the Cocktail Hour outside under the tent and on the beautiful stone patio. Bridal Party Introductions down the staircase leading outside to the dance floor and the First Dance. Dinner and Cake Cutting inside (we set up a remote broadcast speaker system inside for dinner music) and then we took the party outside under the tent. Craig LaPlante from Classic Video Productions presented a slide show and same-day video presentation of the Ceremony. Craig ran the presentation thru our built-in DVD with crystal clear sound via our digital system. Meghan & Alex picked the music that reflected there tastes and spent most of the dancing portion of the night on the dance floor having fun with family and friends -- that's just the way we like it! Here
Post a Comment
Read more

Have A Great July 4th

July 04, 2009
Well i've finally made time to start a blog..... and there is no better time than the day we celebrate our FREEDOM..... Welcome and Happy Birthday America. Each year on July 4th Americans celebrate their independence with BBQ, parades, night-time concerts and family gatherings. Some have that patriotic spirit every day of the year. Here are some fun facts you might not know: 30 cities nationwide have "Liberty" in their name. Iowa has more than any other State (Libertyville, New Liberty, North Liberty and West Liberty). 11 cities have "Independence" in their name. The most populous being Independence, MO. 5 places adopted the name "Freedom", such as Freedom, CA with 6,000 residents. There is only 1 city named "Patriot" and it's located in Indiana. Celebrate the patriotic spirit of America by attending a fireworks show to watch the sky sparkle. You can also be one of the more than 66 million Americans who have participated in a BBQ in
Read more