It Was 32 Years Ago.... Elvis Remembered 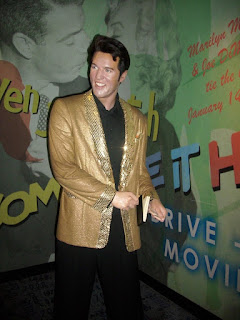 I remember that night very well on a hot August night in 1977 when over the distant crackle of Medium Wave radio: "This is Radio Luxembourg - From Fleet Street 208 Daily Mirror News - We've just had reports confirming the death of Elvis Presley, who died in Memphis at the age of 42." So reported DJ Tony Prince on the 11pm news on 208 Radio Luxembourg , who then went on to play commercial free Elvis songs for the rest of the night - unprecedented at that time. It's hard to believe that it was 32 years ago. It was just one of those moments in time that will stay with me forever and is part of my collection of classic radio shows. The iconic status that Elvis achieved in his lifetime coupled with a sudden and relatively early death cemented his position as one of the most famous rock stars ever. His life and times have been documented well and his spirit still lives in his music, a permanent statue at Madame Tussauds and the lucrative impersonation industry. Here
Read more
More posts