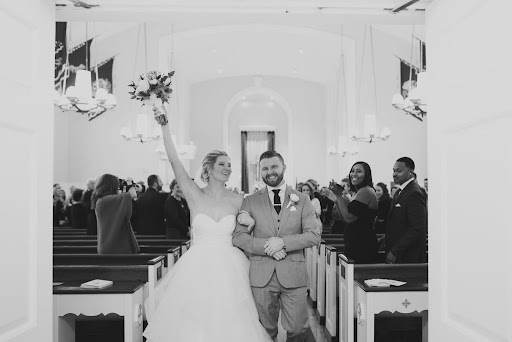 Melanie Ruth Photography Real Wedding – Chelsea and Emmett – Coast Guard Academy, New London, CT Emmett and Chelsea met at work and had their first date at Rizzutos in West Hartford. Chelsea’s family is from Pittsburgh. So, on occasion Emmett and Chelsea would have drinks at their favorite restaurant, the beautiful and historic Grand Concourse in downtown Pittsburgh. This, then, was the location that Emmett chose to propose to Chelsea. As she walked across the concourse, in front of the grand staircase, Chelsea realized that she wasn’t actually alone, there was someone at the top of the stairs. As she turned her head, her heart skipped a beat and she dropped her jacket… instantly, she had realized what was happening! After a few minutes of Emmett fumbling through his proposal speech, she said “yes” and then suddenly, Chelsea heard the screams from family and friends who had secretly been hiding to witness the proposal. Chelsea and Emmett’s Introduction Music: Beyonce – Crazy in Lov
Read more
More posts