January 21, 2011
I have never been a football fan. If my husband wanted to watch his favorite college team - the Auburn Tigers - then he had to go to his dad's or a friend's house. Football was not my cup of tea. Why a bunch of boys wanted to run around a field and hit each other while chasing a pig never made much sense. Big games were tolerated - the Super Bowl and the Iron Bowl - occasionally. I did manage to even attend a few "Bowl" parties out of moral support for my husband's obsession. Even with the fanfare surrounding the monumental games, football just didn't do it for me. It's not that I don't like sports. I love sports. I grew up around brothers, male cousins, and a whole gaggle of guys in the neighborhood. I ran track, played volleyball, basketball, and baseball. At the University of South Alabama, I became enamored with soccer (yes, the players themselves had much do with that infatuation). Living in Mobile provided me the unique experie
Read more 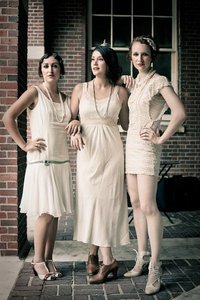 Atmosphere Productions Violinist Danielle Turano will appear on the Hallmark Channels "The Martha Stewart Show - Winter Wedding Show" along with her band Carte Blanche , who were featured on her Holiday Open House Special which aired in December 2010. Danielle, Cristina & Kate of Carte Blanche, have been playing for Martha Stewart since they first met in September of 2010 performing for Stewart's nephew's wedding at her home in upstate New York.  As a result of that performance, Carte Blanche are currently featured in Martha Stewart's Winter 2011 Edition of "Martha Stewart Weddings" Magazine with two fantastic pictures of the band. You can pick up a copy at Borders, Barnes and Noble or anywhere magazines are sold. Carte Blanche are currently rehearsing for the recording of a full length album which is scheduled for release in late Spring.  The music includes Edith Piaf, some Manu Chao, old-time dixieland, break your heart ballads and lift your
Read more
More posts