Outdoor ceremonies are inherently difficult events to pull off successfully.   Location, noise and Mother Nature are just a few things that come to mind that are totally uncontrollable.  But, when you have an officiant who is knowledgeable, works incredibly well with event coordinators, family members and the Bride & Groom, then your chances of success are that much greater - Rev. Dr. Robert Henderson is such an officiant. Rev. Dr. Robert Henderson is an Ordained Protestant Minister with 41 years of experience, who performs wedding ceremonies throughout Connecticut.  He officiates Interfaith Ceremonies, Single Religion Ceremonies, Same-Sex Ceremonies and Non-Denomination Ceremonies. We highly recommend Rev. Dr. Robert Henderson and the many ceremonies that he has worked with Atmosphere Productions we have found him to be prompt, timely, knowledgeable about protocols relating to microphones and sound, and above all showed a natural affection for what he was doing.  In explain
Read more 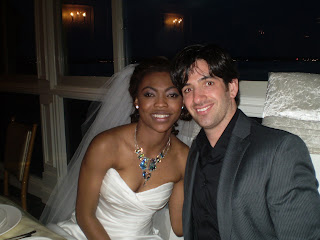 One of the great advantages of the wedding business is seeing the diversity in music and cultures.  No two events are ever the same. Yvette and Brian shared both with family and friends on their wedding day. It was so great to see Yvette's family members, from her native Ghana, dressed in traditional brightly colored African attire. Did I mention it was also Brian's birthday?... Yes, Brian got married on his birthday. On a beautiful afternoon, Yvette and Brian exchanged vows on the beach overlooking the harbor at Anthony's Ocean View in New Haven.  Cocktail hour followed outside in the Garden area also overlooking the water. Photography was in the very capable hands of Bob Hennessy Photography .  It's always nice to work with Bob & Marie who's years of experience and style really show.... always having the Bride & Groom as the first priority. Yvette and Brian selected Leona Lewis "I See You" (Theme From Avatar), which was the first ti
Read more
More posts