May 08, 2010
Make Me Look Fabulous Bob Hennessy You may not be saying that out loud but lets face it you want to look your best on your wedding day. You especially want to look your best in those enduring photographs. So how do you communicate that to your photographer without appearing to be a raving narcissist? Well, just be honest. We have worked with many clients who would never want to admit their shortcomings. But we all have them. In fact most of the “beautiful people” will admit to flaws they try to hide. And with the help of talented makeup artists, photographers and retouchers they manage that “beauty” quite well thank you! Your photographer knows you want to look your best. You want to look your best. But how do you know that you are both on the same page? Well you must be willing to talk about those things that bother you the most. Perhaps you think your nose is too big or misshapen. Maybe its your thighs or you have one too many wrinkles or… What ever it is that bothers you, mus
Read more 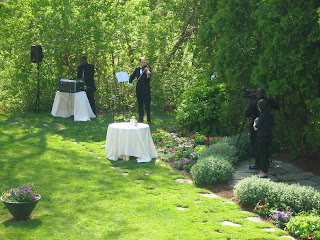 I was a little hesitant when the call from Amanda & Eric came just a few days before their wedding reception to let us know that the wedding was going to be featured on TLC's "Four Weddings" .  I had never seen the show and was apprehensive about wedding reality shows in general.... since these types of shows seem to be so far from "reality". Nevertheless, I caught an episode and was pleasantly surprised.  The concept and execution was quite good....Four brides attend each others weddings and rate each. The bride whose wedding scores highest wins a free honeymoon. I nterestingly, the brides seemed to commend each other rather than reign criticisms. So, on the day of the wedding, we arrived at The Spa at Norwich Inn for an early set-up and was greeted by Peterman, one of the producers of "Four Weddings" and Jill Fahey, the Wedding Coordinator for The Spa.  We signed off on the necessary photography & television release forms and then expl
Read more
More posts