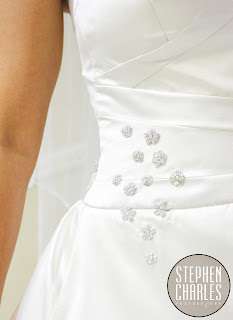 A white wedding dress or gown is symbolic of todays weddings.  But that has not always been the case.  Throughout history the wearing of special clothing was the focus of the celebration. 1) The first American wedding traditions can be traced back to the British settlement in Jamestown. There is evidence of multicolor wedding dresses available in those early days.  Black being especially popular in Scandinavia. 2) White became the preferred color for both the informal wedding dress and formal wedding gown after the famous royal wedding of Queen Victoria and Prince Albert in 1840. The wedding dress with train and veil became the new trend of the 1870's. 3) The luxurious floor length clothing worn by brides in the middle of Depression Era America, became officially known as the Wedding Gown. 4) In the 19th century most American couples were wed by a clergyman at the home of the Bride, with an informal ceremony. The Bride wore the best dress she had, could afford or
Read more
More posts