March 12, 2012
Atmosphere Productions musicians have some of the highest accomplishments in the area and are experienced in all aspects of your Ceremony, Cocktail Hour and Dinner Music. 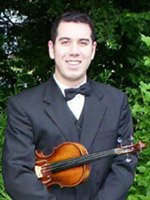 Ben Dean, is a founding member and violinist in the nationally touring act Caravan of Thieves. In a culture where originality is highly valued, recording artist, performer, clinician, and composer Ben Dean is a stellar talent. He began his career on a full scholarship to the prestigious Hartt School of Music where he graduated summa cum laude. In addition to his conservatory training, Ben is a highly accomplished recording artist whose work will be featured in the upcoming film “Brothers Bloom” (2008) which is starring the Oscar winning actor Adrian Brody. As an educator, Ben is currently on faculty at the Avon Old Farms School. He has been a guest clinician for the Hartt School, ASTA String Fling, and numerous public school districts. In these presentations he demonstrates the art of improvisation for strings in jazz, rock, fiddling and hip-hop genres. Ben scored the music for live performances with the Citi-Arts Dance Ensemble and had his original compositions premiered at the opening of the Hartford Convention Center. He is a featured musician with the Greater Hartford Arts Council, Artist in Residence with the West Hartford Montessori School and maintains a private studio of students, many of which have gone on to win competitions for musical excellence. 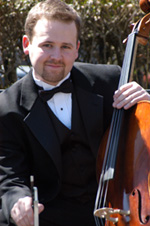 Christopher Jones, cellist, and teacher, has studied cello performance with Jennifer Sills, Ann West, Rebecca Patterson, Mary Lou Rylands and Natalia Khoma. Christopher performs frequently in chamber ensembles throughout New England at public performances, private engagements and even world premieres at Carnegie Hall. He has served as adjunct music faculty in the Manchester middle school, performed in orchestras and rock bands, and judged Connecticut's High School All-State auditions. He currently teaches a studio of over 20 cello and violin students at "Summit Studios," also in Manchester. He has taught an infancy to pre-kindergarten music class in the CT shoreline area called "Teddy Bear Rhythms" for the past three years. Christopher has studied voice at the collegiate level and directed semi-professional a cappella groups. Christopher has completed all requirements for a B.A. in music from the University of Connecticut. 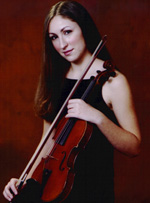 Danielle Turano, has performed in diverse venues throughout the world. She has appeared as a violinist at Radio City Music Hall in New York for the hit dance tour "Jump" and as a soloist with The World Scholar-Athlete Games Orchestra at The University of Rhode Island. She has been a section leader with The New Britain, Waterbury, and West Hartford Symphonies as well as the Hartford Festival Orchestra. Her chamber music groups include the Da Capo Strings and the Arioso Ensemble. She has participated in various festivals including the Kulturfestival in Switzerland, the Session Senese per la Musica Festival, in Italy, the Arcady International Music Festival in Maine, and the Hope Out Loud Music & Peace Festival in Hartford, Connecticut. She has taken part in master classes at The Juilliard School of Music and at New York University with world-renowned classical violinists that include Itzak Pearlman, Marco Zurlo, Almita and Roland Vamos, and Brian Lewis. Danielle has studied violin with premier artists Anton Miller, Brunalinda Myftari, and Anthea Kreston at The Hartt School of Music, where she received her Bachelors of Music degree, cum laude in May 2007. 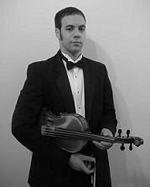 John Biatowas, 2nd violinist and violist, studied under Phoebe Barron for 13 years. He has played in numerous small baroque ensembles affiliated with the Neighborhood Music School in New Haven. John played in Greater New Haven Youth Orchestra where he sat principal 2nd violin during his High School years. John is a graduate of Colgate University in central New York where he was an active member of the Colgate University Orchestra. In addition to orchestral performance, John was a member of the Colgate Chamber Players. He has a masters degree from the University of Connecticut. 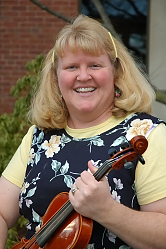 Nola Campbell, is a professor of Music Education at The Hartt School and has held teaching positions in Utah, Hawaii, Wisconsin and Michigan. She has taught early childhood music, general music, string, chamber and orchestral instruction to students from kindergarten through high school and at several universities. Dr. Campbell received her Ph.D. in Music Education, with a cognate in orchestral conducting, from Michigan State University. Her Masters of Music in instrumental conducting and B.A. in music education are both from the University of Utah. Dr. Campbell has held several extended conducting positions with bands, symphony orchestras, pit orchestras, and string ensembles in public schools, universities and for private organizations in several states. Her performing experience includes positions in symphonies, quartets, musical theatre pit orchestras, and back up orchestras for the likes of John Denver, Ray Charles and The Manhattan Transfer. And, as if her career as a violist, conductor and educator weren’t enough to keep her busy, Dr. Campbell is also an accomplished trombonist, actress, and fluent in Japanese. She is the director of The Hartt String Project through the University of Hartford Magnet School, serves on the CT-ASTA Board, and remains an active performer, clinician and teacher.

Celebrating over 30 Years in the Wedding/DJ/Entertainment Music Business
Member of The DJ Network
Member of The West Hartford, CT Chamber of Commerce
DJ Times ~ Mobile DJ Of The Month
Former WKND Air-Personality