Vincent Ingala strikes again with his sophomore effort entitled "Can't Stop Now". Live performances for his CD release party took place at the Palace Theater, in Waterbury and in conjunction with WEIB 106.3FM's, "Smooth, Soulful & After Work Cool Down" at the Holyoke Hotel & Conference Center, in Holyoke, Massachusetts.

The Palace Theater release party was a home away from home for many of the guests.  After all, this was home turf for Vincent and most of the attendees.  And as Chuck Ingala told us, this was his old stomping grounds and a tour stop for many established artist in the 60's & 70's, before the Palace Theater fell into disrepair.  Only to be revitalized, in the late 90's, with the urban renewal of the City of Waterbury.

As always, Vincent's live performances are reminiscent of a house party - no one afraid to dance whenever the groove takes them.  He commands the stage with his presence and a charm that is well beyond his youthful age.  Warming up the attending crowd, Ingala launched into Jay and The Techniques' "Apple Peaches Pumpkin Pie" and Average White Band's "Let's Go Round Again".  We're still hoping to hear these and Hamilton Bohannon's "Let's Start The Dance" on a future recording.... or maybe a Vincent Ingala "Live"!! 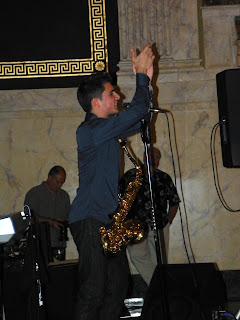 The rest of the evening had Vincent playing selections from his new release "Can't Stop Now".

All the tracks are original compositions by Vincent (plus two collaborations), except, for two remakes, "This Time Baby" & The Moments classic "Sexy Mama".  The title track is already getting much airplay on smooth jazz formats -  deservedly so!  It's a quality production displaying Vincent's growth and talent.

The two magical collaborative tracks, the funky "Groovin' U" featuring keyboardist Gregg Karukas and the intoxicating "Kimi Trick" featuring keyboards Jonathan Fritzen, are stand out selections for today's Smooth Jazz radio.  "Kimi Trick" was specially selected by Vincent to premiere on my friend Rich Edwards SmoothGrooves Show on Gloucester FM.  Expect these two tracks to be played all summer long and, my guess, well into the autumn.

The most talked about track is "This Time Baby".  A slightly different interpretation on a classic Bell & James composition based on the O'Jays version, rather than the Jackie Moore disco version.  Once again, at 19, Vincent shows remarkable maturity and more than a little nod towards his father Leo's 12" DJ record collection.

"If I Could Fly" and "Wish I Was There" show's off Vincent's writing.  Both compositions have great flow and nice keyboard or guitar and sax combinations.  I love "Wish I Was There" for it's 70's jazz funk feeling production, showcasing his guitar, sax and keyboard style.

Don't forget the down tempo, moody, Sade style "Read Between The Lines". Wrapping up the set is the lovely "Just Imagine", which reminds me so much of the Paul Hardcastle "Rainforest" classic.

An altogether outstanding and solid second release from Vincent Ingala - he knows what he wants and he can't stop.  Fan's, like myself, will have "Can't Stop Now" on continuous play... new listeners will realize why this could be one of the top smooth jazz collections of the year.